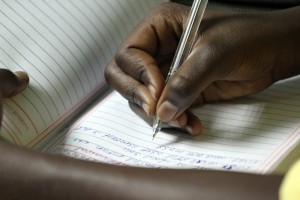 John was born in Southern Sudan and is Dinka, by tribe. John’s first father died while he was still in his mother’s womb. His step father was later killed in front of his eyes. His mother set an example for him growing up by serving, continually, in their church. John remembers growing up in a time of famine and drought. As a boy he desired to attend school and learn whatever he could, but he also had the job of caring for cattle and other animals. He lost boyhood friends to wild animals that would come attack the cattle in the night, and so he lived in constant fear. He had no clothes to wear and as John puts  it, he “worked and went to school as naked and natural as God created me!” He never owned even a pair of flip flops or any shoes and had no money. He would sleep with the cattle at night in order to protect them and many times killed deadly snakes in the middle of the night, as he walked through thick mud and tall grass that was way over his head, not knowing where he was going except for the flashes of lightening in the sky, during frequent strong rains, that would occasionally light his path.

John’s school consisted of about 1,000 children of all ages, sitting in the dirt. No books, paper, pencils, black board, supplies of any kind, and one teacher. All of the students were instructed by writing in the sand and waiting for their teacher to come round and check their writing, after which this teacher would wipe the sand and give something else to write. John remembers one day receiving other Sudanese who had walked from Ethiopia, a journey which took nearly 6 months. On their heads they carried the entire way, boxes that had been received from UNICEF, which had some school books and pencils for them. The teacher sat the children down and divided each pencil into three parts in order to stretch out their supplies. Any scrap of trash that could be used as paper would be collected from the rubbish piles, divided and used, and books shared. . John remembers seeing many of his friends and family members die during these days of famine. They died from malaria, from diseases, from hunger, and attacks on his village. One particular day, Christmas 1990, the government forces sent anti-node bomb that exploded. He ran to hide in something like a cave. He came out to find many people dead all around him. His friends and family that were left, all knelt, crying over dead bodies and collecting their dead for burial. They lived in constant fear of government raids. When this happened in their villages, soldiers would come and kill their men, take women to be slaves for the soldiers to “use” as they wished, and take the boys to be tortured and then put in Islamic schools. Families were split up, many never to be reunited.

John himself was captured during one of these raids, accused of being a spy, and put through horrific torture and jailed. In 1995, during another government imposed war raid, many children were taken, young women stolen away and John managed to escape! He walked with another group of fleeing people from one town to another northern town, for three days without food, water or anything on his feet. A lorry came by and he managed to join the crowd in the back of it. This Lorry took them to Khartoum, the capital of Sudan, where he didn’t know anyone, where to go or what to do in order to survive. At this point he’d been totally separated from his mother and sister for quite some time and had no idea if they were even alive. John ended up selling cigarettes on the streets of Khartoum. I used to pass by these small boys selling cigarettes many times a day when I lived there years back! From his sales he tried to save enough money to eat, pay school fees and just survive. John didn’t see his mother for many years and later found that she had been able to also get to Khartoum and was safe. While in Khartoum, John worked hard, continued as best he could with an education and served as a member of his church. Throughout his time in Khartoum, John was jailed and tortured a few more times and forced to sign a paper stating that he was not to leave the area without security permission, not to tell anyone about his being tortured, but he WAS to report to the security office twice weekly and that he would be killed if he did not comply! John hid for a time, was detained again and tortured again. He was able to escape through the help of church friends, and entered Egypt in 2000.

John started his life again in Cairo and eventually was introduced to AHLC, volunteering for quite some time as a Librarian and kitchen supervisor. He graduated from there to the esteemed position of school accountant and held an important job in our school. John has not seen his mother for over 10 years. Her case was reviewed and she was given refugee states by the UNHCR and transferred to a faraway land. John’s sister and her children were given refugee status and moved to Egypt while she was still pregnant with their fourth child. Since being in Egypt, he’s been caught and placed in jail twice, for a week or more. Without the accurate paperwork, John is not even allowed to legally work in Egypt! John, now in his 30’s, is working full time and has tried to study hard!  He’s responsible for the care of his sister, who can no longer work, and all of her children.

Recently John was able to return to Sudan and proudly see the places he grew up in.  He went  back wearing his three piece suit and tie, his nice shoes, bearing the Christian music cassette of him singing that he’s just recorded and gave it to the people still around that remembered his family, and encouraged them. He wants to get married soon and return to Sudan with his family.  Right now though, he is helping his community in Cairo Egypt….a key part of the strategies of African Hope Learning Centre. 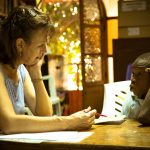 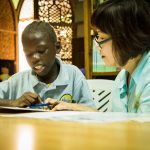 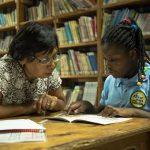 Though I’ve only spent several sessions volunteering with the reading program, I’ve already felt enveloped in the warmth the community at African Hope exudes. Each Saturday, a group of regular volunteers gather to sit down and read with children at different levels, encouraging them to find a passion for reading and helping to refine their individual skills.

It was only recently that I truly realized the impact the reading program can have on the rest of the student’s educational experience. After one session, India, program leader, asked that we pull out specific files. There were certain students who showed signs of struggling in their classes and the volunteer’s notes confirmed that these students needed more individual attention with their reading if they were going to meet their academic level.

It’s exactly this idea that makes the reading program so important – the commitment to individual attention. With a program like this and the help of volunteers, students are able to pause for a moment and individually engage with someone to work on building their reading skills. This one-on-one moment also helps to create connections with students, even if brief, and explore how they think as they piece together words to form a story.

The most fun thus far has been seeing those students who walk into the library eager to start reading and connecting ideas to understand the stories. It is loads of fun to sit with a child and work through a story with them, slowing down to discuss what they think will happen and prompting them to try describing new words. I always enjoy asking students to relate books back to themselves, helping them to immerse themselves in the tales they’re taking on and find links to the world around them.

Each student is unique in the way they approach a book – some running through the pages, some slowly taking the time to pronounce each word, looking to me for confirmation. Others are quick to respond to questions, endlessly discussing what they see in the illustrations, while others need some more encouragement to try and understand new words.

Though each session with a student is not too long, it’s an ideal amount of time to make reading an enjoyable experience for the student, one they hopefully look forward to each week. It’s certainly an experience that I wait for eagerly each week and hope can continue to involve myself in more!

You are welcome to join us!

In 2021 we celebrate 23 years of providing a place of learning for African refugees in Cairo, EGYPT!